You are here: Home / octopus / Spanish Octopus in Paprika Sauce 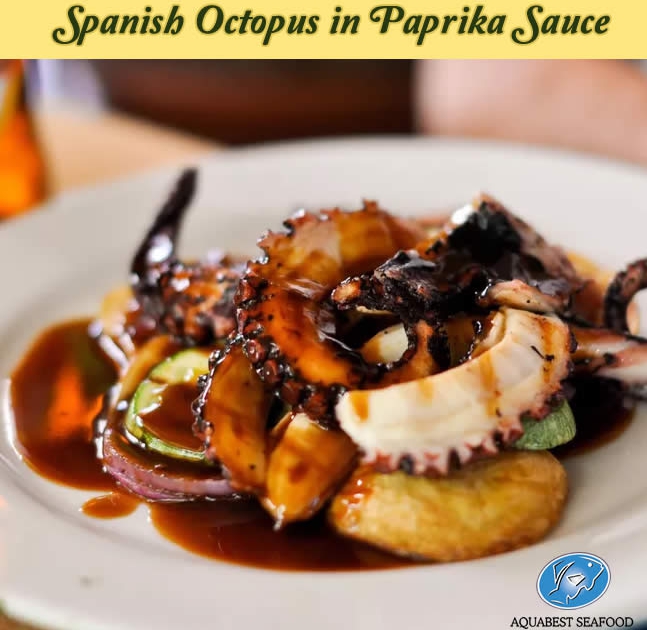 Preparation of Octopus
Thaw the octopus in the refrigerator for a day or two.
Wash the octopus thoroughly under running water, paying particular attention to the suckers on the tentacles.
Bring a large pot of water to a rolling boil. Place the octopus in the pot, cover it and return the water to a boil.
Boil the octopus for 8 minutes.
Take the octopus from the boiling water onto a cutting board and chop off its head. Discard the head for this recipe.
Place the octopus with herbs and spices of your choice. Possibilities include a combination of oregano, rosemary, garlic, bay leaves, laurel, saffron, sage, tarragon, thyme, basil, or parsley. The octopus meat absorbs the flavors of the herbs and spices.Cover and cook for three to four hours at 200 F until tender.
Cut the octopus into chunks and keep warm.

Preparation of the Paprika Sauce
Add salt, pepper, paprika, and garlic in a mortar and pound it until it is a paste. Slowly add the olive oil, stirring and mashing all the while.
While the octopus is still warm, put it into a large bowl and toss it with the paprika-garlic sauce. Squeeze the juice of 1 lemon into the bowl and toss to combine.
Serve warm or at room temperature with slices of lemon.

Source: from the awesome web www.thespruceeats.com

Tilapia and Quinoa with Feta and Cucumber
Scroll to top